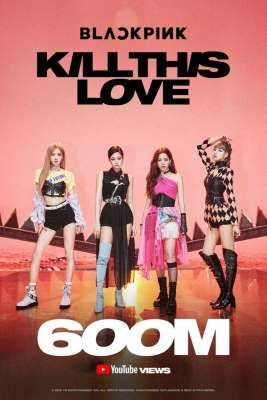 The video for BLACKPINK's latest song, "Kill This Love," surpassed the milestone of 600 million YouTube views on Sunday.

The music video topped the threshold Sunday morning, 177 days after its official release on YouTube in April, according to the K-pop band's management agency, YG Entertainment.

It is the shortest period a K-pop music video has amassed more than 600 million YouTube views. Previously, BLACKPINK's "Ddu-du Ddu-du" held the record as the K-pop video that achieved that milestone the quickest.

"Kill This Love" is BLACKPINK's fourth video to receive 600 million views. The others are "Ddu-du Ddu-du," "Boombayah," and "As If It's Your Last."

Following its release in April, "Kill This Love" peaked at No. 41 on Billboard's Hot 100 single chart and No. 24 on the Billboard 200 album chart.