[K-Drama]: Sung Hoon and Han Bo Reum are nervous during the game match of "Level Up"

The MBN new drama 'Level Up' scheduled to be broadcast on July 10th will be released with the restructuring experts Ahn Dan Te (Sung Hoon) and Shin Yeon Hwa (Han Bo Reum).

Ahn Dan Te is the ace director of Yoo Seong CRC, a company specializing in restructuring. He is a true “cold city man” of this era with a poker face that doesn’t express emotions, perfect workmanship, and cold-blooded harshness.

Shin Yeon Hwa is the chief development officer of the dying game company Joy Buster, who teams up with Ahn Dan Te. She will start to develop a new game to satisfy him, but they will end up quarreling, creating a lovable comedy for the viewers.

It is not only chemistry of Sung Hoon (Ahn Dan Te) and Han Bo Reum (Shin Yeon Hwa), but also catches up with the atmosphere before the broadcast.

Among these, two people with unusual airflow were caught. Two people sitting at the desk side by side in a situation where they watch are holding a game machine in a hand and making a nervous battle. In particular, Sung Hoon maintains his sharp eyes and unshakable expression, while Han Bo Reum warns his eyes with flaming eyes, showing a remarkable high temperature between the two people.

The unusual battle between Sung Hoon, who does not like the game and the one-off game known as the usual game, suggests that the two are in a situation where they can not retreat at all. I wonder if the two people will have a game show in front of everyone's eyes. 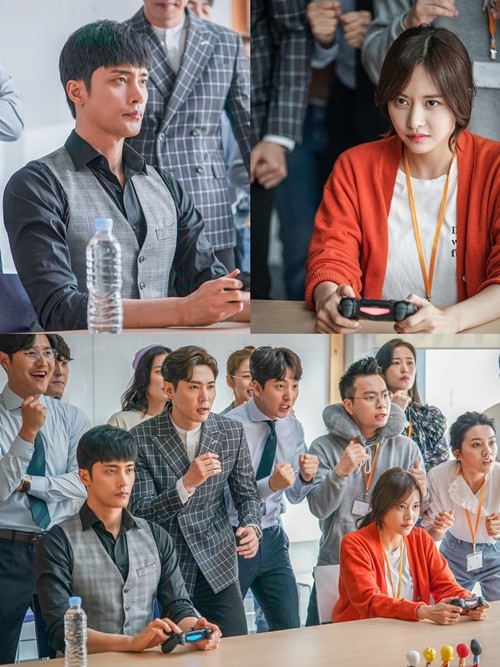