Fans of the "Three Lives, Three Worlds: The Pillow Book" franchise, it's time to rejoice! Our queen of Qing Qiu and the Heavenly Realm, Bai Qian, played by Yang Mi will be appearing tonight in the web drama Three Lives, Three Worlds: The Pillow Book". Her cameo reunites her with the current leading lady Dilraba Dilmurat whose character makes her return as the goddess Feng Jiu after spending a lifetime as Xiao Jiu in the human realm. 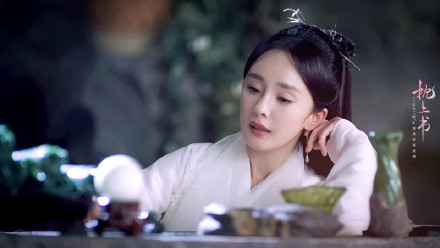 In a 15-second snippet from the drama's teaser, our white nine-tailed fox queen is seen to be inseparable from her alcohol while ruminating about the hassle of her upcoming wedding with Ye Hua. It is very in character of her to just drink her problems away while her son A-Li seems to be busy playing in the corner.

It can be remembered that Yang Mi has long been rumored to star in this drama with a cameo and many fans have expressed their excitement and hopes that Mark Chao can also reprise his role as Ye Hua. Sadly, that does not seem to be in the pipeline but it is worthy to note that the Eternal Love of Dream's predecessor drama, Eternal Love, has reached its third year since it aired. Now this cameo of Yang Mi is a good way to celebrate that! 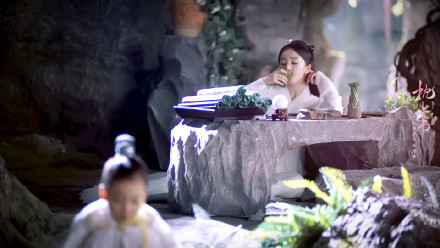 I haven't gotten around to watching the drama but I surely am excited to watch it even more now that everyone's favorite goddess is set to appear again. Luck is in the way for the WeTV VIP subscribers, as they will able to see this most-awaited cameo earlier than everyone else as episodes 21-22 drop.

Are you excited as I am in seeing Feng Jiu's beloved gu gu? It seems like she will also be there to give some advice to her beloved niece. Dilraba recalls how they filmed their scene together and said that it brought back feelings from when they first acted their parts.